Have you ever stared hard at something...

And tried to figure it out?

There's so many things these days, different types of bikes, wheels, and whatever else.  You get used to having to look at something properly, having to use all your faculties to ascertain what use a cardboard mud guard, why someones glued leather gloves to their handlebars, or if they actually think the fabric 'flesh coloured' plaster (the kind that was ALWAYS floating in the verruca pool at swimming) is actually going to hold the seat to it's post.

Being in the Big London, there's this bike just parked outside our hotel and for the past three days I've been trying to work out how it's ridden.  Standing on the pedals arms stretched out far, changing direction like pulling the ropes on a boat sail?

Or perhaps sat down far, the owner with a reach like Mr Stretch, leisurely gliding along not a shit to be given?

Three days I've looked and pondered on this. 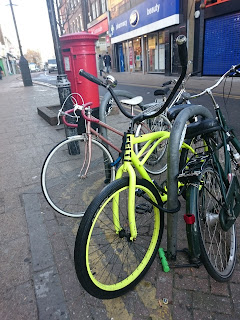 Three days I've examined closely, curious, wondering if it would be rode standing up on the pedals, body forward into the handlebars as if skiing.  Or leisurely sat down, arms stretched out, and corners leaned into like one does on a sail boat?  Why is the wheel tucked in so? Is the bell difficult to use?  I'm imagining some sort of chin notion that doesn't seem safe.  But then... but then....

Perhaps it's just a fixie, with the front wheel turned round for ease of locking.  Sometimes... cycling really is just that simple.
Posted by Hedge Bandit at Tuesday, January 03, 2017 3 comments:

I was quite ill last year.  Three bouts of antibiotics and a face infection so I'm very nervous about being sick this year.  Doesn't help I'm producing so much snot I could bathe in it.

Usually I get on best at this time with high intensity interval training, but I don't think it helps with being ill and all so I'm trying heart rate training.  I was initially doing 160bpm but since my nose is leaking like it hit an iceberg, and I'm a bit virussy, I'm going to take that down to less than 150bpm.

I'm also doing this on my mobile so of anyone can tell me how to justify my paragraphs I'd be forever greatful. 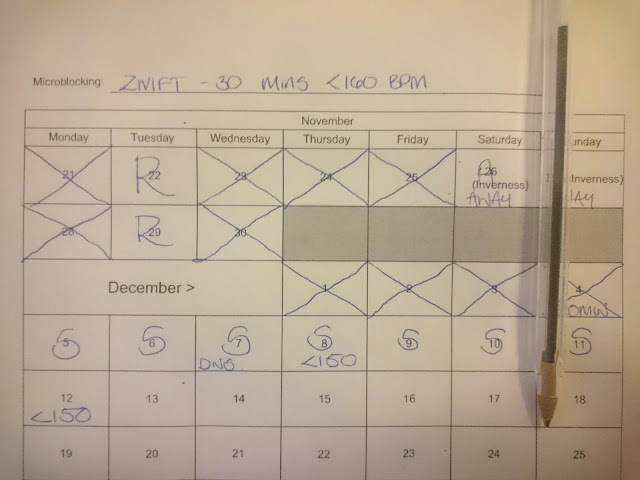 Posted by Hedge Bandit at Sunday, December 11, 2016 No comments:

No.  Not today as I've woken up in a black fug, which isn't helped by the 18 degree outside temperature and broad sunshine.  My misery wants some company but the summer burned off the haar from this morning and there are people smiling.

I'm not sure but I think my mood might be slightly affected by my decision to change my diet.  If there's anything that will put me in a black fug it is the word 'diet'.  Food restriction of any kind tends to make me a bit twitchy eyed.  Mostly because we could be doing so many things more with our time rather than thinking 'I really shouldn't have had that cake' or agonizing over calories*. The hypocrisy of this is that as someone who has a lot of food allergies there are a lot of things I shouldn't eat, and indeed, I'm probably one of the few people who really should be thinking 'I really shouldn't...' and since I haven't been thinking that I'm feeling the bloat.  The big massive watery bloat.  So I've been cooking beans all day.  Black beans, pinto beans, black eyed peas** beans and chick... er.. beans. It's in the hope that instead of having a cheese toastie of a luncheon I shall be able to quickly either nuke or boil off some beans in some soup or for some salad and munch on that, and then eat the cake I usually have.

I have also been doing the 5:2 'lifestyle'*** with a friend of mine.  I'd put on a stone of weight about two years ago - sounds strange but I could feel it in my knees - but once back on my usual exercise regime it didn't come off.  Being a wee bit older now I have to look at other options. It's 2 days of a two egg omelet and soup split up on a Monday and a Wednesday. Most folks think that sounds awful but then I've come to the conclusion that most folks can't cook.  Most days it's a doddle but if I've scheduled a omelet and diet coke day and I'm not really feeling it I don't. My weight went down about 4kg and I've gone down a notch on my belt, but it's kind of stalled now but as I say I need to get back into the habit of eating stuff I'm not so wholly intolerant to.

Today is a 'fast day' but I'm not hungry.  I've had a sh!t load of coffee.I normally have about 3 cups regardless, but I still feel like I haven't woken up properly so I had my lunch early.  I had edemame miso soup with pak choi and I'm not feeling hungry just in need of a nap.   The dog is lying on the couch softly snoring and it's very tempting to join her. Though it is getting close to her time for  a walk.  It would probably do us both good.


* I could go into the psycology of false humility there is in 'weightloss'  but I'm not going to. I can't be arsed.

** no Fergies or Will.I.Ams have been hurt during the making of these munchies.